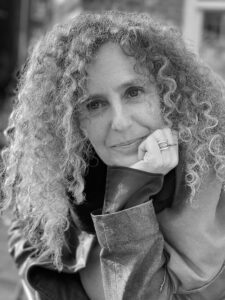 The female body is key to the work of Ruthi Helbitz Cohen. It “performs” on the canvas in different shapes and guises: dressed or undressed, in the role of a clown, witch, child, or femme fatale; as a mythological goddess or historical figure; hanging from the ceiling, floating, lying down; fragmented in space, alone or in the company of other complementary figures. The artist takes the body apart and reassembles it, like a mechanic might do with a car or an engine, or a scientist when dissecting and studying the body of an animal. It is as if she is searching for the inner essence of these women by pulling their bodies apart, by painting heads, limbs or organs separately and then putting them back together like a mismatched puzzle, in which the individual pieces don’t quite fit. A sense of uneasiness arises at the sight of a skull-like head on top of a semi-transparent torso, of a body dissolving into a dark cloak, or of arms taking the place of legs, reaching up towards the torso.

Eros and Thanatos, love and death unite within a single, inseparable figure. Helbitz Cohen says that: “I want to make a small but significant change in viewers’ observations and understandings. Get them interested, get close and turn their head around. I want to make them doubt what they hold as true, real, acceptable.  I want my paintings to be inoperable, I want the spectator to object. I would like the painting to generate an unpleasant but at the same time desirable thought process that will make the viewers want to possess this distortion.”

To behold Helbitz Cohen’s work is to behold a world rich in contradictions, strong and subtle emotions, and intricate thoughts seen through a distorting mirror. Beyond the horror, disgust and pain lies a world of delicate beauty.

In addition to the numerous museum exhibits in Israel, she was invited to show her work in Germany, Netherlands, France, Denmark, Greece, China, and the USA. Alongside the artistic work in her studio, Ruthi teaches art in both the Beit Berl Arts College and the Oranim College, Program of Multidisciplinary Studies in Humanities and the Arts (M.Ed.).